The practice of feng shui is not a new one to many of us. From interior decorators trying to define the ‘spirit’ of a space, to a college student picking out pretty knick-knacks for her room, everyone has some idea as to what feng shui is, and how it is said to bring us good fortune to their living environments. 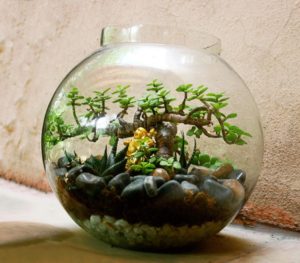 Feng Shui has a special place in many Indian homes. A cursory glance would reveal a good-luck bamboo nestled on a desk, furniture placed strategically to let the energy flow through the doors, or a water fixture right outside a picturesque window. The practice of feng shui has become a huge part of architecture and interior designing in this country, and with it the rise to popularity of feng shui experts and prominent practitioners. Armed with degrees and extensive training from masters in China, on various aspects of feng shui, these practitioners have become the go-to people for anything from correction of the aura of a house, improving the financial position of the family, or deciding on the right floor plan for a building. Some prominent names down south are Chitra Hanson, Dennis Joy, SBS Surendran and the like.

With the help of these experts, feng shui has seamlessly aligned with geomantic elements in our own culture, like vaastu Shastra. This alignment is so effortless that one may assume that feng shui is simply the oriental version of vaastu. But did you know that feng shui has its origins in some of the oldest and most majestic dynasties in Chinese history? This article will give you a brief glance into how feng shui bloomed out of ancient burial rites to become the practice of furnishing your home to bring you great fortune!

What is Feng Shui?

Feng Shui (pronounced: fung shway), is the Chinese philosophical system of harmonizing oneself with the surrounding environment. The literal translation of the phrase into English is “wind-water”. Feng Shui views the engineering and physics of architecture in metaphysical terms of “invisible forces” that bind the universe, earth and humanity together. These forces are what are commonly referred to as qi (chi).
Feng Shui is practiced as an attempt to make oneself more compatible with nature, in order to make a positive impact on finances, health and emotions. This is done by channelling and balancing the prevalent energy that flows through our homes and offices, in order to have a gainful effect on our lives.

Where did Feng Shui Originate?

The origin of Feng Shui can be traced back to the time of the earliest farmers and cattle owners of ancient China who used astronomy to identify safe dwelling places where families would flourish and the best burial sites for their relatives. The practice was later applied to determining sites for palaces, government buildings and other public monuments.
Perhaps the oldest known records of Feng Shui are seen in the Shang Dynasty (1711-1066 B.C.) where palaces were built surrounded by beautifully landscaped gardens with water features and hills, showing the concept of Yin (the negative) and Yang (the positive) juxtaposed in harmony, balance and continuity.
In his book What is Feng-Shui: The Classic Nineteenth-Century Interpretation, Ernest J. Eitel mentions the Chow dynasty (B.C. 1122) who practiced a hierarchy of internment, where ordinary people were buried in plains, princes on low hills, and emperors under a mound on the top of high mountains. Confucius, in his extensive records of such geomantic practices of the time, observes that the people believed that the head of the deceased should point towards the North. The dead had their heads towards the North, believed to be ruled by the female principle and associated with death and decomposition. The living placed their heads towards the South, ruled by the male principle and associated with life and vigour. 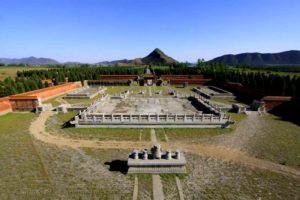 The West Han dynasty introduced the concept of chi, with cities planned in concentric rectangles, surrounded by walls, lakes, hills, valleys, gardens, courtyards and parks that were thought to act as channels for the positive energies that surround the building.
The belief that feng shui or geomantic practices could actually bring good fortune, began to take a solid shape between the time of the Three Kingdoms (A.D. 221-277) and that of the so-called Six Dynasties (A.D. 265-618). Several incidents to prove these have been recorded in works like “Memoirs of the Three Kingdoms”, where individuals were said to have seen great wealth and prosperity after having followed feng shui in their internment rituals. Ernest J. Eitel states in his book that the geomancers added on references to the twenty-eight constellations, borrowed from the Hindu Nakshatras, to their charts and diagrams that guided feng shui. This is an obvious result of the entrance of Buddhism into Chinese lands. 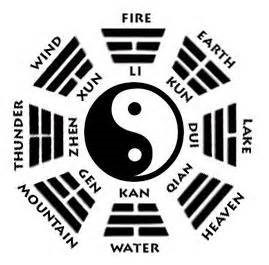 Ko-po, a supposedly mythical personage of the time, is said to have compiled all these historical records, and the guidelines of feng shui and published them as a book known as the Tsang-shoo (book of internment), which is considered as one of the principal sources of reference for students of Feng Shui. This later became the popular handbook of geomancers across China, during the Tang dynasty (A.D. 618-905).
The practice of feng shui firmly took root in the culture of China during the Sung dynasty (A.D. 950), along with the belief that the natural world influenced man and his well-being.

The practice of feng shui has remained an integral part of the Chinese culture. Even several government buildings and places of business, like the Bank of China in Hong Kong, are constructed with the principles of feng shui in mind.
Though the fundamentals of Feng Shui are strongly rooted in the culture and traditions of China, the essence of feng shui does not depend entirely on cultural aspects. Feng Shui can be applied to interior decoration and architecture, regardless of the modernity of the purpose of the building and the surroundings. Feng Shui yields itself to the appeals of aesthetics, colour schemes, and functionality, and co-exists with them to create a positive energy to any physical space.
Image courtesy –
Figure 1 source: https://ozziesterrariums.files.wordpress.com/2013/11/img_4614.jpg?w=810
Figure 2 source: http://10kblessingsfengshui.typepad.com/.a/6a00e39336235e88340147e28f410c970b-pi
Figure 3 source: http://www.chinasage.info/imgs/EasternQingTombs.jp
Figure 4 source: http://chinesemedicinetraveller.com/wp-content/uploads/2013/10/thCAFGP9WC.jpg

The Indian design industry has potential to grow over Rs 18,800...

How to dress this winter! – Winter fashion ideas with Vogue