Dark narrow corridors, overcast by a shimmering ceiling with a mercurial quality, lead into plush interiors of deep-toned wood, soft velvet in dark tones and ceilings that warp your sense of reality. If this feels like the setting of a horror thriller movie, then you couldn’t be more wrong. This is the dark energy given off by the interiors at Alice & Fifth, an enticing sub-terrain restaurant over at the Sandton Sun Hotel in Johannesburg, South Africa.

Alice & Fifth restaurant and bar was the recipient of the “Best Overall Winner” award at the International Restaurant & Bar Design Awards held in London in October 2019. The credit for the unique interiors goes to Tristan Du Plessis, owner of Tristan Plessis Studio, a Johannesburg based interior designing studio. His Studio A has been around for a little over 3 years, but has already won many high-profile international design awards. Tristan Du Plessis was one among entries from more than 70 countries. He has 10 years of experience in the design industry, but at the age of 31, he is one of the youngest competitors to receive this award.

Alice & Fifth is a luxury restaurant that soon became the talk of the town at the Sandton Sun Hotel, attracting the richest, most powerful businessmen, celebrities and top brass politicians alike. Ensconced cozily in the basement of the hotel, the brief of the restaurant design, in the words of Du Plessis, was simple: “create a sumptuous and decadent space juxtaposed with a raw, unrefined, underground edge”. His final creation embodies this vision in the most hauntingly beautiful way possible.

Drawing his inspiration from the cabaret clubs of Paris and New York in the 1920s, Alice & Fifth shows off opulence and sensuality of a heavier, darker tone. The curved French paneling, lush velvet, and the deep tones of the dark-wood panels would, one can imagine, be the perfect backdrop for the beautiful people that would grace its rooms. The rooms themselves, dramatic room-sets consisting of several bars and dining rooms, tease the guest with its labyrinth curves, which add to the mystery of the surroundings. Studio A commissioned hand-crafted design pieces from artisans in Johannesburg and Cape Town. Many of the fittings, like the walnut wall paneling along the bar, and the dramatic ceiling piece at the corridor were original pieces commissioned to artisans in and around Johannesburg and Cape Town.

One enters Alice & Fifth through an enticing bijou corridor with a low ceiling made out of a solid piece of hand-moulded polished stainless steel. This gives the ceiling the appearance of liquid mercury in flux. The stainless-steel sheet, at a length of around 12 metres, was moulded in Cape Town and shipped in one piece to Johannesburg, to be installed in the restaurant.

The restaurant features soft olive velvet seats and smooth marble walls that flank pools of darkness created by the dark wood paneling. These juxtapose the stark contrasting colors of the raw, exposed concrete columns. Instead of relying on colors, shades and bright interiors, the designer has tried to “peel away some layers”. He says he went so far as to actually strip away the paint and plaster off the columns to expose the natural raw beauty of the original building. He combined this with the reds and greens in furniture and hangings. At various sections, there are groupings of what adds up to around 8,000 rich maroon tassels hanging from the ceiling, which were imported from India. 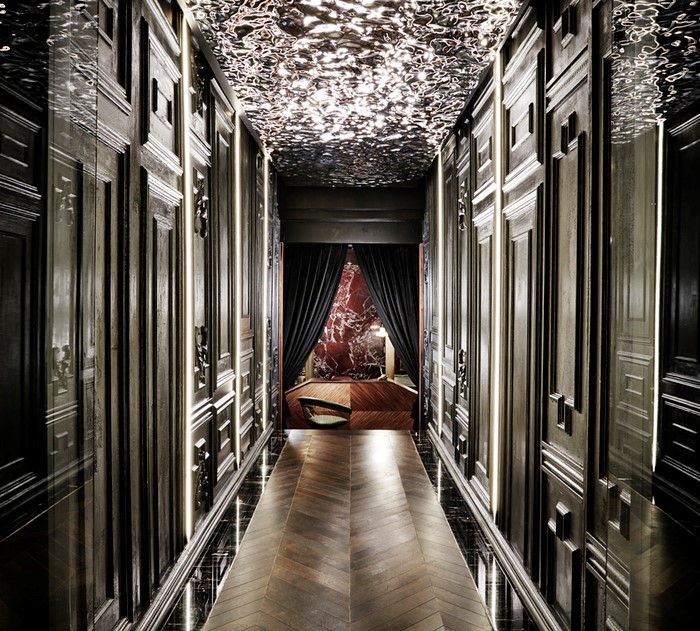 The restaurant oozes avant-garde charm and opulence, and this is seen clearly in the bottle of Louis XIII cognac that is displayed in a cabinet on the wall at the entrance. The display is but a sneak preview into the luxury that awaits one further into the restaurant. A fascinating aspect of the restaurant is the fur-covered chairs that are placed at plush, crescent-shaped banquettes. Real fur from Iceland was brought in to line what would otherwise have been mundane chairs. One portion of the room features an old-world paneling that bends in a strikingly futuristic manner to become the ceiling, thus giving the space a cave-like feel.

With this, Du Plessis gives the restaurant a sense of “luxury with rough edges”. His mantra is to not restrict himself to any one style of interior design, but opting instead to have a chameleon-like approach to the interiors of a space, converting the given canvas into colors, shapes and sensations that suit the original structure and shape. Altogether, Alice & Fifth reflects the designer’s vision, which is an underground labyrinth of magnificence, luxury and an almost mysterious urgency.

Rebuilding a cause – Modern temple interiors

Bengaluru by design – Design takes over

First of all, why does one need a portfolio?

Meet Babita Jaishankar, an image consultant, a designer, and a confidant