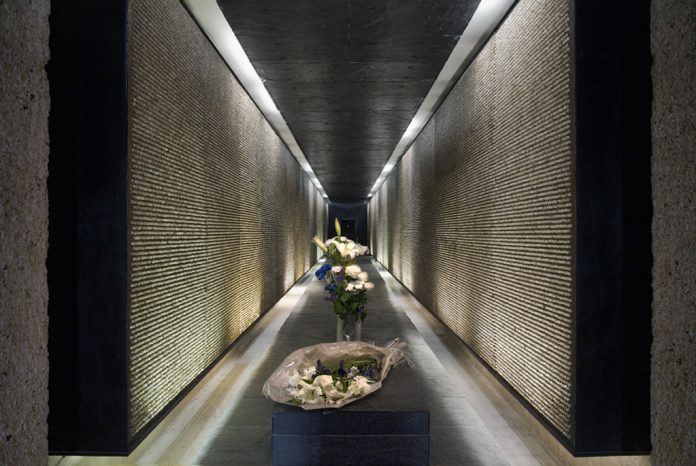 Sometimes a loss is so great, that it’s difficult to put it in words and is rather better conveyed with art, sculptures and architecture. Words play a lesser role and emotions are described in material and ambience. Memorials help us to confront our feelings and heal. They act as standing reminders to the follies of our past and pose as constant encouragement to do better. Sure, an art piece or statue could never turn the wheels of time and undo anyone’s losses – they’re incomparable that way – but they help in highlighting people’s pain and act as guilt inducing tools for the perpetrators. To elaborate, below is a list of some of the most moving memorials around the World.

The Memorial to the martyrs of the deportation in Paris emphasizes the dark, depressing last journey the Jews took when they were captured and killed by the Nazis. Designed by French architect Georges Henri Pingusson, it is a moving reminder to the 200,000 French citizens who lost their lives in concentration camps during the Second World War. The design doesn’t aspire to pay tribute as much as it intends to make the visitor feel a fraction of what the victims felt. A descending stairway entrance leads to the dark barely lit inner corridor relating the horrors of the Nazi treatment in material and feel.

One of the installations in the Lidice Memorial in Prague recalls the horrific tragedy that 82 children underwent at the hands of the Nazis. The Czech sculptor Marie Uchytilová spent 20 years carving in bronze the faces of these children who were gassed by the Gestapo in retaliation for a Nazi general’s assassination by a resistance group in Lidice. The scared eyes, clutching hands, staring into space and the pain of snatched innocence reflects in the sculpture. The bronze is affected by the elements of nature over the years, making it a more stirring recollection of the massacre.

Another moving sculpture was erected on a flight of steps in Prague by sculptor Olbram Zoubek and architects Jan Kerel and Zdeněk Holzel. The installation describes the state of men in a totalitarian communist rule, their harrowing mental and physical downfall via seven decaying bronze sculptures. During 1948-1989, Czechoslovakia witnessed the demise of 5,075 prisoners and the forced emigration of 170,000 people accused of political crimes. The statues stand in remembrance to the people who lost their lives, the people who escaped and the people who had no choice but to continue to be abused in those dark times.

Gaeta Springall Atquitectos create a public place with a view to commemorate the victims of violence in Mexico. The simple design conveys a deeper understanding of the Mexican past and current brutality and endeavors to create a harmonious, inclusive environment to bring people together as a setting stage for peace. The chosen textures – steel and concrete against the forest backdrop blur the lines between artificial and natural as a nudge to lose oneself in a mixed environment. The three different steel finished walls create three different effects – the rusty steel to indicate the scars borne in life, the stainless steel to reflect and multiply the living and the natural to reinforce the values to live by. A concrete and grass walkway meanders through these walls where the dim night lighting against the steel creates a dystopian effect reminding once again of the violence to be curbed.

3500 people were shot and thrown into the Danube river in Budapest during the Arrow Cross terror. Film maker Can Togay envisioned a sculpture to mark this tragedy which was later realized by sculptor Gula Pauer. The 60 pairs of iron shoes on the banks fashioned in the same style as that worn during the Second World War when the massacre occurred, pays ode to the people who lost their lives at the hands of Hungary’s then Fascist government.

India is undergoing one of the most tragic times in human history. We are dealing with culpable deaths in astounding numbers, trying to find ways to cope with personal loss. Deaths of loved ones and acquaintances, job losses, economic trouble and a sense of helplessness is sweeping over Indian people. Moreover, the World is collectively witnessing atrocities on people in foreign lands, long standing feuding countries, climate crisis and protests. They say, ‘History is the greatest teacher,’ and we should learn from past mistakes. Erecting memorials and sculptures to honor the injusticed creates a sense of hope and trust that the future will be better. As India loses millions of lives, here’s hoping that we commemorate in some way or other, the fatal mistakes of our system and government and vow to do better in the future.

Design should be democratic, not discriminatory: Takbir Fatima, DesignAware